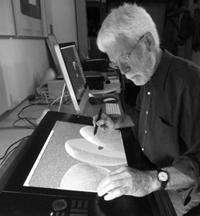 Rudolf Bikkers, artist, teacher and master printer, was born in Hilversum, Holland, in 1943. He graduated from the Jan van Eyck Akademie in Maastricht, Holland, in 1966 and immigrated to Canada that same year. For the past 45 years Bikkers has taught at various art schools in Ontario, the past 30 as professor at the OCAD University in Toronto, from which he retired in 2012.

In 1975 he established the master print studio Editions Canada, where he printed and published many national and international artists with the best of his graduate students as assistants. In 1986, while chair of OCAD’s Printmaking Department, he established the Extension Gallery in Toronto. It served the dual purpose of headquarters for the Canadian Print and Drawing Council and special exhibition space for his OCAD students.

In 1988 he published An Artist’s Journey, a handmade autobiographical book. 1994 saw the publication of his Shostakovich Quintet, a boxed set of 5 lithographs,

to be followed in 1999 by his print portfolio From Cello to Stone, based on J.S.Bach cello suites. My Muses, a bound collection of 20 triptychs – lithographs, serigraphs and monoprints inspired by 20 composers – was launched at Toronto’s Goethe Institut in 2006.

Among his fundraising initiatives is the AIDS (Artists International Direct Support) portfolio for Sub-Saharan children affected by HIV/AIDS (2000) and the RCA/EPSON Painters Portfolio (2002). Since 1967 Rudolf Bikkers has had over 20 solo exhibitions and has participated in more than 45 group shows in Canada and abroad.

He has received several Honorable Mentions and Purchase Awards, (Ernst and Young Printmaking, C.W. Jefferies, A.J. Casson Award). Bikkers was elected to membership in the Royal Canadian Academy (RCA) in 2001 and was awarded The Queens Golden Jubilee Medal in 2002.